Final profiles for minor characters which are defined by being a Pokémon Trainer. If your character does not definitively belong in one of the forums below, they belong here.
Post Reply
1 post • Page 1 of 1

Jizaikon [Female Mienshao] — Such is life, but a calm breeze in a summer morn.
A sedate Pokémon who relaxes except when provoked, Jizaikon is one half of the fighting duo that belongs to the Mahoran martial artist.  She spends much of her time when not sparring with Shinchintetsu or Ku Fei herself, laying around and setting pieces on a wéiqí board, or rather vocally criticizing the martial arts students her mistress teaches. She's not frequently used to train the students directly because she's just as prone to keep a student knocked to their backside as she is wait for them to stand back up and keep fighting.
—Befriended in Rota Mountains.

Shinchintetsu [Female Hitmontop] — Spin, little doll, spin...
The second half of the fighting duo that belongs to the Mahoran martial artist, Shinchintetsu spends much of her time sparring with Jizaikon, or Ku Fei herself. When not in training with her partner or owner, the Pokémon is sparring with one of the students, or one of the students' Pokémon. She's utilized by Ku Fei more in this aspect because of her more steady personality, making her the less likely of the pair to lash out and give a student a good wallop because they're not learning fast enough.
—Befriended in Rota Mountains.

Even when I'm pressed up against an insurmountable wall... wrote:Ku Fei is short and slender, even after having graduated. Her skin is slightly tan, causing her striking green eyes and bold blonde hair to stand out against her complexion. Her clothing usually falls in the traditional category, but she is also fond of wearing shirts and shorts and cute things. 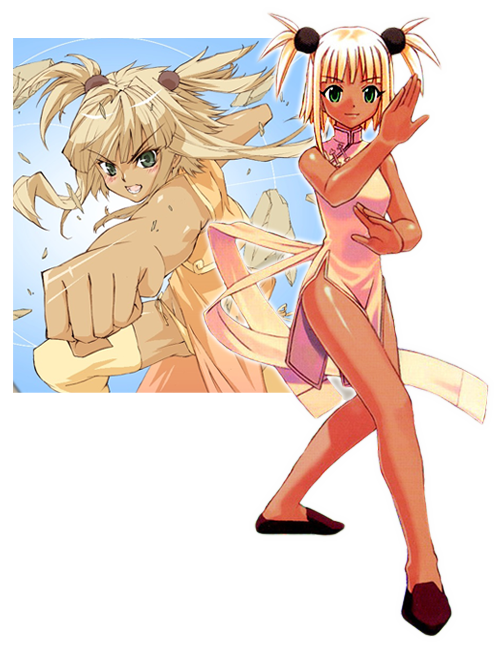 ...You were there. wrote:Ku Fei is the 12th student in order of class 3-A. She is the silly, fun-loving Chinese warrior girl of the class. Although she can appear to be to be an idiot who uses her fists rather than her mind, Ku's fighting skills are top-notch making her one of the more dangerous students in the class. Her martial prowess is well known throughout the Mahora community.

She became an early trusted ally of Negi Springfield and she taught him martial arts in order to help him progress in his own training. She is also infamous for her appetite and her obsession with baozi (in particular from Chao Bao Zi) from fellow classmate Chao Lingshen. To this day, she keeps in touch with Chao and owns some of the stock in the Chao Bao Zi restaurant line.

Following graduation, Ku Fei went on to found her own martial arts school called Ku Roshi in Mahora to teach others after her. She currently also specializes in training Pokémon in martial combat as well and has considered making the school an unsanctioned Pokémon Gym, similar to the dojo found in Saffron City. And, as always, she can be found at the local Chao Bao Zi foot truck on the corner.

Kung Fu: Despite being master of Chinese martial arts, her rank does not reflect her fighting abilities. She uses a fighting style that is noted at being rough but powerful alongside the use of complex movements that allows her to lunge with her staff from the left and defend with her sheath at the right, though she is ambidextrous and can easily switch between the two techniques. She uses misdirection in her attacks and even though doing so allows for holes in her defense she is more than capable of making it up with surprise attacks.