Final profiles for characters which are defined by being in an organized military.
Post Reply
1 post • Page 1 of 1

Harmony [Female Kriketune] — "Let me soothe you with a song."
Polite and friendly, Kricketune is the only Pokémon that Blanche has ever owned.  Given to her in her youth by William, she began as a tiny Kricketot.  She has been battled little, and instead serves as a companion and protector to the young woman.  However, this does not mean she is incapable of holding her own in a fight.  She is well versed in many types of melody and tune, and can typically be found in Blanche's office, playing music for her.
—Obtained as a gift from William.

Snowdrop [Male Pikachu] — "A whisper of sound, like the drifting of freshly fallen snow."
Snowdrop is a pokémon that Blanche found by pure circumstance.  Shortly after her arrival in the Kanto region, near the early part of winter, she found Snowdrop, then a Pichu, curled up under a tree, asleep, and half frozen.  She rescued the Pichu and spent the next year raising and pampering the pokémon.  Eventually he evolved, apparently pleased with her.  Blanche still has no idea how he came to be under the tree she found him beneath.
—Rescued from a blizzard near Vermillion City.

Sous un ciel étoilé. (Under a starry sky.) wrote: Blanchefleur Delamere is a woman in the prime of her life, and it shows well.  Her shoulder-length brown hair is kept trimmed, but usually tousled around her face.  Her skin is a flawless and creamy white, and her eyes a deep shade of amber.  Standing at 5'8" barefoot, 5'10 in her heels, Blanche is tall for a woman.  While she maintains a high level of fitness, her musculature is lean, more suited for jogging and swimming than fighting, though she is not above a throw-down if necessary, hints of her wilder youth.

In regards to clothing, Blanche is usually seen in a lace-frilled business jacket and skirt, or a well tailored ladies suit.  Despite being a businesswoman, she dresses on the cutting edge of fashion, her short skirts more than short enough, and always a hint of her bust beneath her jackets.  She keeps most of her unruly hair pulled back with a black hair band, but unfortunately that rarely lasts for more than a few hours.  When on her own time, she resorts to tight fitting denim, loose soft blouses and sneakers.

Despite the fact that she's nearing thirty, she maintains a 'girl next door' type of appearance.  The one possession she is never without is a black locket which contains a picture of her mother and father. 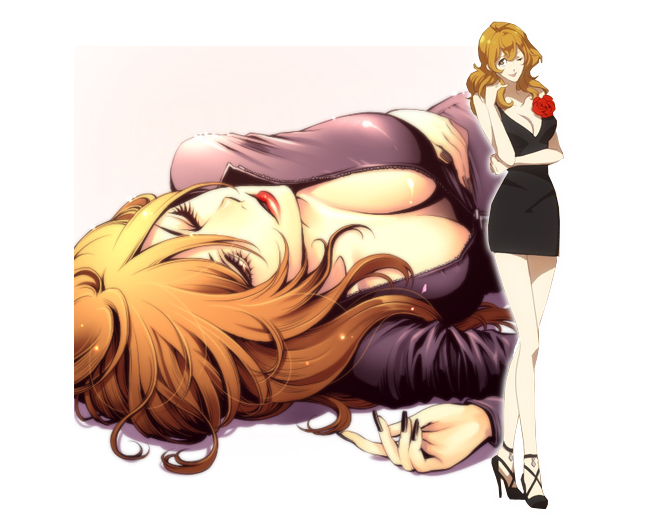 Caché dans mon journal. (Hidden in my journal.) wrote: Despite whatever else Blanche has been through, her personality has changed greatly over the years since she came into William's care.  As a businesswoman, she is forced to wear many distinct faces for each aspect of her business dealings, but each of these she considers a necessary mask to contend in what is typically a vicious side of the world.  The primary faces she wears are three-fold.

The cold and often times cruel business woman, not afraid to take prisoners and do whatever is necessary to achieve her goals, be they financial or otherwise.  She is also the sympathetic employer who considers the potential difficulties of every employee and attempts to provide whatever assistance she can for them to keep her workplace running smoothly.  And the fast-talking woman who can convince someone that they absolutely need something they'll never use to make their life complete.

All of these faces are ones she wears by choice, but they mask her real personality.  Outside the business arena, and in her personal life, Blanche is actually a very kind woman, with a deep love for music and an instinctual empathy for those around her.  As long as business isn't involved, she is easy to become friends with, and deeply loyal to those who she comes to know well, though she holds most people as casual acquaintances until given a reason to allow them into her trusted circle.  Her most loving side is currently reserved for her father-figure, William Blackmoore IV, who she regards with great affection for all he's done for her since becoming her guardian at age 14.

Echos du temps avant. (Echoes of the time before.) wrote: Blanchefleur was born in Paris, France, to the heir of the Delamere import and export business, and the heiress of the Roux family fortune.  Coming from an affluent and wealthy family, she spent the majority of her youth excessively spoiled in the way children born into that sort of life usually are.  Despite being born into such a busy life, she was lucky in that much of her time was spent with her family, traveling all across the world.

Her life was as one could expect it to be during her childhood.  Traveling, given all the best toys, a private tutor who traveled with them to school her, a wardrobe that could put some clothing stores to shame, and anything her small heart could desire, she was as much of a brat as any child who was given anything and everything.

Until late one fall, when everything changed for her.

At the age of 14, at her insistence to stay behind in Paris to attend the birthday party of another young girl, a tragic accident left Blanche abandoned, though not by choice.  Her parents, on an airplane headed across the Atlantic Ocean, were killed when an engine malfunction suddenly brought the plane crashing down into the ocean.  They were killed upon impact.

It was this stroke of fate that would forever change the lives of two people.  Blanchefleur Delamere, and William Blackmoore IV.  While they had met briefly when she was five years old, Blanche barely remembered the gruff old man who her parents had entrusted her care to.  For reasons unknown to her, she was now in the legal care of William, and none too happy about it.

Fourteen, suddenly alone, and in an unfamiliar situation, she did what any teenager would do.  She acted out; doing anything she could to make his life difficult.  Sinking into a deep depression at her loss, and the fact that her own selfishness had spared her when her parents had died, Blanche became suicidal.  The grief-stricken girl tried anything she could to end her life, and the situation between she and William finally came to a head on her 15th birthday, when he caught her attempting to snuff her life.

Her reaction was explosive, as the two screamed at each other, Blanche battering herself against the old man, crying.  His reaction or maybe it was his lack of reaction that finally broke through the haze of despair she'd surrounded herself with.  Life would continue, with or without her cooperation.  He wasn't going to allow her to kill herself when he had been entrusted with her care.  And she was just going to have to get used to that fact.

His strict behavior with her began a deep change.  Rather than being handed any of the vast fortune that was in trust for her, she was instead forced to take up a job that he himself had done when he was younger.  Working as a papergirl for two years, Blanche learned the value of things earned by her own hard work and effort.  And slowly, though with difficulty, the relationship between Blanche and William grew.  No longer was he her taskmaster, but instead someone she considered with great affection.  His continued upbringing of her shaped her into the young woman she was growing into.

At eighteen, he gifted her with the first and only Pokémon she currently owns; Kriketot, who eventually became Kriketune.  The amount of change that had been effected in that four year span between both of them was incredible, though those four years were far from easy.  Free of his care as a legal adult, Blanche instead remained with William by choice.  It was then he began to groom her into businesswoman as she attended college, it was also then that he began to teach her self defense.  At the age of twenty four, she was finally given charge of the Delamere business, an achievement for someone of her youth.

Despite all of that, her work had a dark undertone to it, and was shadowed by something that William had confessed late one night.  Though she had initially dismissed it as an old man's ravings at the time, events moving in the world showed her what it was she had scoffed.  That there were signs that the Prophecy of Armageddon was true and that he was preparing a plan to try and prevent it.  She committed herself towards helping him realize his goal.

When he moved to Kanto to oversee the terraforming of Seafoam, she followed, moving her business headquarters with her, though she does a great deal of traveling now that he is retired, attending meetings he cannot, working both the Delamere business as well as his own where he permits it.  The gruff old man who took her in at 14 is now affectionately referred to as Papa; just one more sign that time can change anything.