The pale light of the full moon. wrote:Lunala is a large Pokémon resembling a skeletal, legless bat. It has a short snout, dark pink eyes with white centers, and a deep blue area on its upper head that shows a constantly changing starscape. A rigid, raised hood wraps around its head in a crescent shape and drapes around its neck as well. The outside of the hood is yellow, while the inner part that curves around Lunala's head is a pattern of deep blue and white streaks. Its torso resembles a ribcage with a slightly curved spike on each shoulder and three spikes extending from the bottom toward its tail.

Its massive wings resemble a bat's wings with the skeleton exposed, except that Lunala's wings have a total of seven "finger bones": four running through each wing, one running along the edge to the outermost tip, and two pointing upwards that may act as claws that are more functional. The four "bones" through Lunala's wings are only visible in segments. The skin of Lunala's wings is an iridescent deep blue, and a light blue light source appears to glow from behind its ribcage. A large, pale yellow crescent connects the outermost tip of each wing to the next two inner tips, and the remaining two innermost tips are adorned by yellow, four-pointed stars. The bottom of Lunala's tail is also lined by a yellow crescent, with a ridge running up the middle of the tail towards the ribcage. 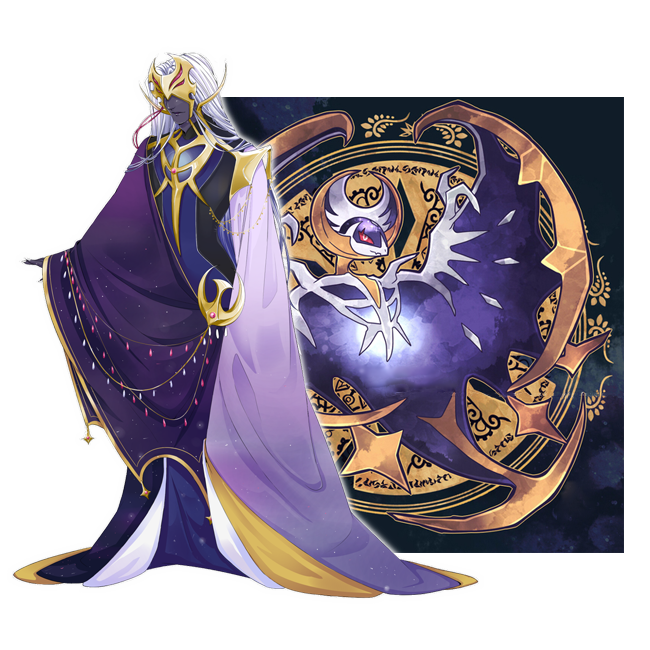 Artwork by Fawnlenn (front) and Kanna (back).

Though we are of darkness, we are no less noble. wrote:If Solgaleo is the brilliant glow of the Sun, Lunala is the pale light of the moon. Known as the beast that calls the moon, Lunala is as feral as their counterpart, if only in reverse. A withdrawn and solitary figure that spreads their pale radiance through the night sky, Lunala is given to equal turns of gentility and brutality, the light and dark sides of the moon.  Their primary focus is their Arceus-granted purpose, and little else concerns the great bat as it wings its way across the night sky.

But rarely, the world of humans catches Lunalas attention, and their wings, and purpose, is turned towards the defense of the humans who inhabit the world that Arceus so carefully created. Lunalas calm demeanor hides a fierce brutality that is brought to bear on those who would halt its purpose, or destroy what its father created. The great bat is loyal and devoted, despite being equally distant and withdrawn.

In its chosen human form, Lunala is a diplomat and rational thinker, equal parts conversationalist and philosopher, as well as a historian who marks and records the passing of human history with great interest. They are calm and soft-spoken, but capable of turning ice cold and hostile at a moments notice. Lunala is more of a thinker than their solar sibling, certainly, but can ultimately fall prey to the same primal behavior when left to its own devices.

Do not turn away from the shadow. Instead, bare your fangs and demand of it obedience. wrote:It was absolute darkness where the Lunar Child slept in the legendary Halls. Wings were coiled tightly around its body, and its head was tucked in tight against what served as its chest. Somewhere nearby, radiance sought to push through its cocoon, and the creature shifted, red eyes glittering like gems in the shadow of its wings. One wing slowly uncurled from about its body, and then the other, wide mouth opening in a yawn, pointed fangs visible in the curve of its maw. Its sibling was walking the Sun, like usual. Bounding in distant fields. And shedding too much light, too close to the previously slumbering creature gripping the shadows of deep space about it for its blanket.

A glitter of gold and a ripple of starlight as Lunalas wings spread to their full width, stretching wide in the sky, a fluttering beat later, one of irritation at the now slumbering lion that was their sibling, and Lunala was winging across the night skies of the world below, watching the way the waves beneath shifted at their passing, and the way people scurried into their houses, or pressed out into the night. Such differences between the denizens of the islands far below. A great head shifted, turning this way and that as they sank further towards the islands.

This was, after all, one half her charge. To watch and guard, to protect and guide. To patrol and keep watch as their sibling slept a deep slumber. And to watch the moon drift across the sky. But the moon shed light on a changed and worsening Alola. Something was coming. Something that would disrupt the lives of those who lived far below. Something dangerous, that caused her wings to stutter in their otherwise steady beats. Lunalas head lifted away from the islands, eyes narrowing on the distant skies above. It would not do. He would have to be spoken to, and an accord struck. They had work to do against the coming Darkness, for neither would be able to banish it alone.