Where you post your profiles when you have yet to finish them. When you're done with them, repost them to the New Profiles forum!
Post Reply
13 posts

. wrote:A little more on the tall side, Brooke cuts an elegant figure for a young woman of her age. Her features are mostly fair and her deep grey eyes are set in a heart-shaped face. Her form is somewhat delicate, with minimal muscle tone, a slender frame, and a gently feminine curve that is not too much, but also not too little. She has very few defining marks on her body, save the long blonde hair that falls well to her waist, and is brushed forward over her right eye. She carries herself with poise and grace that reflect a more privileged upbringing, perhaps in a more well off family.

When it comes to fashion, Brooke tends towards either the comfortable and subdued, or the more gothic Lolita clothing style. High collared shirts with ruffled cuffs, corseted skirts, long stockings that pause mid-thigh, and black high-heels. Shes rarely seen not in a skirt or some kind of dress, and her tastes are both sensible and stylish as befitting a young woman of her age. Shes usually more subdued in terms of makeup, and prefers very minimalistic jewelry if she wears any at all. She wears few if any keepsakes or other such items, and has very few things that she keeps with her persistently besides the pokeballs which contain her treasured companions. 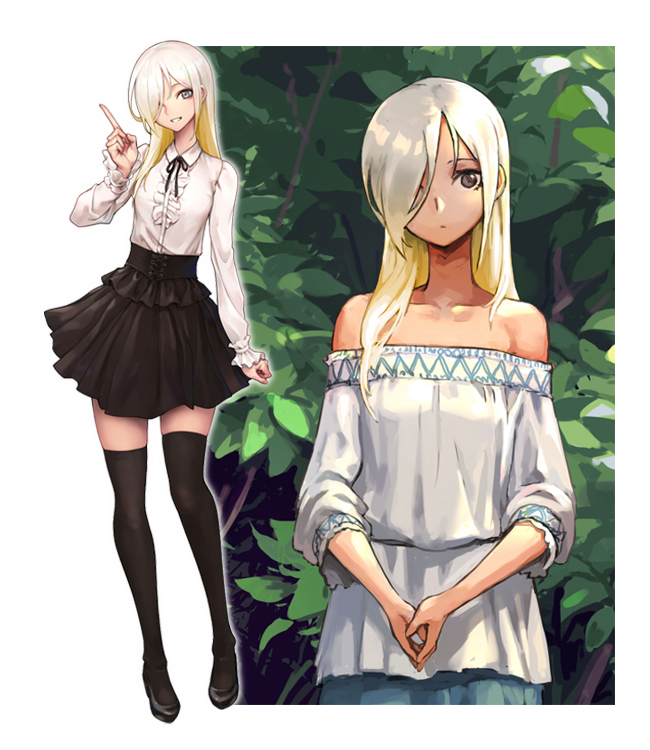 Artwork by Oopartz Yang (front and back).

Pox [Male Venomoth]  "Awesome Quote"
Pox is the Pokémon that has been with Mackenzie the longest. First obtained as a Venonat when she was nine years old, Pox was a gift from Niall, her father. Meant to keep the young girl company when Niall traveled, as he often did, Mackenzie kept up a running dialogue with the Pokémon. What resulted from that constant conversation was a steadfast bond between Pokémon and trainer, with Mackenzie treating Pox like an absolute treasure. Despite the distaste that some people had for moths, Mackenzie has always had a weakness for the insects, doubly so for her best childhood friend.
Gifted

Bubonic [Male Gengar]  "Awesome Quote"
Bubonic was the second Pokémon that Mackenzie got her hands on, and was the first Pokémon that she ever captured in battle. Raised from a Ghastly into the Gengar he is today, Bubonic is every bit as creepy as anyone could ever expect a ghost Pokémon to be. Capricious in a way that is just shy of cruelty, and callously uncaring even of the other Pokémon in Mackenzies team, its a wonder that the Pokémon has any respect for her at all. Despite his nature, he seems strangely attached to the woman, probably because of her own attitudes and mannerisms towards people. Their generalized disdain is a trait that they, almost happily, share.
Captured

Mary [Female Blissey]  "Awesome Quote"
Ah, Mary. The most normally named of all of Mackenzies Pokémon, Mary is a Pokémon that she captured at a much later time in life, once shed passed into her twenties and was completing the necessary science degrees that would enable her to become a Pokémon professor. Most people find it unique that a young woman with Pokémon carrying names like Pox, Bubonic, and Trojan would have a Pokémon with so average a name. A quick history lesson usually clears up any misunderstanding about the normalcy of the Pokémons name. Despite her names origins, Mary is about as average as you would expect a Blissey to be. Shes friendly, warm, and caring, and takes care of Mackenzie, and the other Pokémon on her team. Shes been serving as a research assistant and companion for Mackenzie during her laboratory work, often serving to help calm and care for whatever Pokémon Mackenzie is experimenting either with or on.
Captured

Trojan [Porygon2]  "Awesome Quote"
Trojan is a Pokémon that Mackenzie acquired within the last year and a half, for the express purpose of data compilation and organization. Trojan was a gift from her Uncle Pine, as a sort of going away gift when the young woman was making plans to move to Seafoam and serve as their primary Pokémon professor. Trojan is no-nonsense, and is almost never used for battle  the other functions that Trojan serves are too critically important to the young womans research and experimentation to risk him in any kind of battle. Anything that might result in data corruption or data loss is not to be tolerated.
Gifted

. wrote:Mackenzie is roughly average in height, standing 59 in her heels, and 55 without them. She has messy dark blue hair styled in a bob, and expressive hazel eyes. Her complexion is fair, and her body shape is more on the slender side. Shes not a very athletic individual, and it definitely shows. She tends to accent her otherwise pale appearance with dark makeup, and her clothing matches her general fashion sense  gothic.

Her average work outfit consists of a typical white lab coat worn over a short black dress.  She accessorizes this with a red grommet belt, a black studded choker, multiple necklaces, and strappy black platform heels. Her casual choice in clothing isnt that far of a stretch. She exchanges her lab coat for a short black jacket, extra jewelry in black and silver, and a bluish dress in a white spider web design with black ripped leggings beneath.

When shes neither out working nor out clubbing, Mackenzie dresses comfortably. Long pajama pants, an oversize t-shirt with a Gastly on the front, and various pairs of socks similarly decorated with Pokémon in her preferred types: poison and ghost. Shes only fashion forward in the public eye and reserves her slouchy or sloppily put together outfits for the privacy of her home. 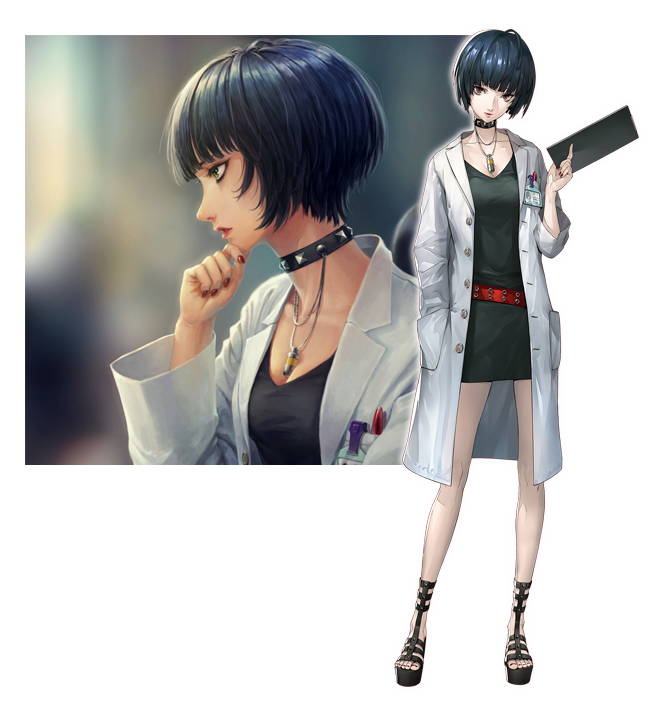 Artwork by Atlus (front) and Mikannorennng (back).

. wrote:Despite her unorthodox work clothing, Mackenzie is actually an individual who takes her job as a Pokémon Professor quite seriously. And though her rather dark appearance wouldnt indicate it, shes actually a rather outgoing person. She has an immense love and respect for Pokémon and a more than slight hint of disdain for people. She has no patience for people who are openly unkind to Pokémon, and a slight isolationist bend that mostly shows itself when shes in her downtime.

Some of her experiments on Pokémon would be considered questionable by conservation societies, but none of them are outside of the realm of Pokémon friendly ethics, as every bit of experimentation she does is with a willing Pokémon participant. When it comes to interpersonal relationships, she actually limits those quite heavily and as far as anyone can tell, she has never been in a romantic relationship in her life. Most people find it difficult to get past her exterior facade, but there's definitely someone worth knowing beneath the many layers she envelops herself in.

Having been raised by her eccentric uncle, Pine, Mackenzie was primarily isolated outside of her uncles lab assistants. A mostly isolated Pokémon alchemist himself, Pine is responsible for most of Mackenzies views and attitudes towards Pokémon, and her unfortunate lack of interaction views towards people. She has shown herself to be equal parts controlling, manipulative, distant and even sardonic. But all of this underlies the fact that she truly does want what's best for the people and Pokémon around her.

When someone does get close enough to really befriend Mackenzie, they find a very driven individual with a wicked sense of humor and an intense dedication to those who manage to gain her loyalty.

. wrote:Mackenzie was the only child born to Niall Conium and Kristine ONeil. The two fell in love during their youth, and Mackenzie was the result of one of their many trysts. But Kristine was never prepared to be a parent, and not long after Mackenzies birth, she abandoned the pair of them, leaving Niall to raise his infant daughter alone. The man did the best he could, frequently helped by his adopted brother, Pine. Pine often watched Mackenzie while Niall traveled for his work  so much so that the girl would usually spend more time with him than with her own father.

When Mackenzie was 8, a vicious car crash claimed Nialls life, and she was made the legal ward of her uncle. But Pine was more than a touch eccentric, and his eccentricities rubbed off on the young and impressionable girl. She became withdrawn and a bit sullen after the loss of her father, looking instead to her uncle for wisdom and guidance. Pine himself wasnt that open and vocal an individual, a quiet introvert who raised Mackenzie in the same vein.

One of the things he did share with his niece, now ward, was his love of science  specifically Pokémon sciences. She made it through her early schooling with all of the usual difficulties of a young girl whod had her entire world spun on its ear by a death in the family, though for the most part she adapted well. Her new focus became a grounding point for her, something to throw herself into to keep her distracted from her new normal.

As she reached high school, however, her fascination shifted into more controversial fields: death, disease, and plague. All of her companions were named accordingly, and as the bright girl shifted into a sullen and morbidly fascinated goth, so too did her interests in science. Still, her fascination with science was stronger than her predilections for the dark and dangerous, and once she graduated from typical schooling into university, Mackenzie devoted herself to study to become a Pokémon professor.

Her chosen field? Ethical Pokémon experimentation for the advancement of treatment of disease and disability in Pokémon great and small. To this end, she also began series of field tests that would allow her, in conjunction with the developmental division of Seafoam, to attempt to create badges that would have tangible effects and benefits for the Pokémon as applied by their trainers. The science was highly theoretical, and despite dedicating half a decade of study to the field, Mackenzie still hasnt had any tangible results, though she feels she might catch a break soon.

After graduation, Mackenzie applied to an internship with her Uncle, something that was granted only because of her academic achievements, and almost denied because of her familial affiliation with him. Her five year internship ended shortly after Mackenzie applied for and was offered the position of Pokémon Professor for the newly formed Republic of Seafoam, a post shes held for a little over a year since the Republics grand opening. 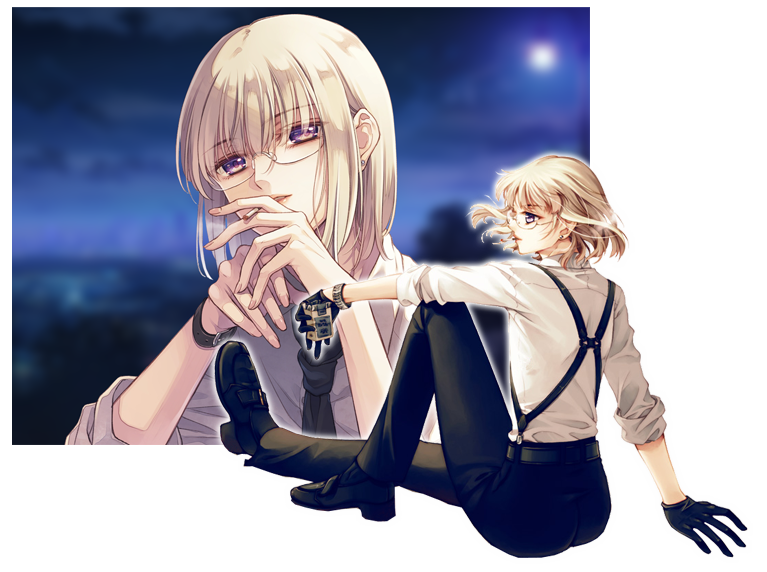 Artwork by Ayamiya Fumi (front, back).